This past week I've been freaking out about an internal promotion talk here at TIGR and finally it's over. It went well, I think. Some people have asked me for the slides, and so I've provided links to them in their original Apple Keynote format and as a PDF.
Posted by Jonathan Badger at 11:16 AM No comments:

I've always had an interest in the history of science, particularly of evolutionary biology, and enjoy reading classic works in the field. While I'm lucky that I live near the Library of Congress, with its fabled collection, it's nice to be able to read from the comfort of my own home (the LoC is non-lending). What to do? One possibility is to read online books. Everybody probably knows that the works of Darwin, Huxley, and other Victorians are available on the net, but you may not know that even early 20th century classics are now available, thanks to the digitizing efforts that have been going on in various university libraries. Some may dislike the idea of reading on-screen, but there are services like CafePress and Lulu that will print and bind a PDF file for you for a small fee (and eventually, we will have practical e-ink devices that will make printing unnecessary. Oh, and flying cars and personal robots too).

Hugo de Vries' Species and Varieties, Their Origin by Mutation (1905) -- The classic "saltationist" work by one of the rediscoverers of Mendel's laws, this is a good example of early thought by geneticists on the issue of evolution -- de Vries considered mutation, rather than selection to be the primary force behind evolution.

Thomas Hunt Morgan's The Physical Basis of Heredity (1919) -- The book that established the gene as a real entity on a chromosome rather than an ideal "factor".

R.A, Fisher's The Genetical Theory of Natural Selection (1930) -- Considered the most important advance in evolutionary theory since Darwin, this book ended the "eclipse of Darwinism" caused by people like de Vries by explaining selection in terms of Mendelian genetics.
Posted by Jonathan Badger at 6:33 AM 3 comments:

Self censorship or just common sense?

In today's Nature there's another installment of Prospect by Paul Smaglik (yes, it's not open access -- unclean! unclean!). If you don't read it, Prospect is a column geared towards postdocs and other beginning researchers and aims to give them career advice, often verging on the banally obvious. Today's was a little different -- it's entitled "Could blogs replace résumés?" and suggests that "perhaps it's best to treat your blog as a public document that you wouldn't mind your next boss reading". Well, I suppose -- realizing that what you say on the Internet can come back to haunt you is not new and dates back to the early days of Usenet newsgroups, but at the same time it isn't possible to say anything interesting without potentially pissing off somebody.
Posted by Jonathan Badger at 12:00 PM 1 comment:

Well, today a series of papers on the Global Ocean Sampling Expedition (including one first-authored by my drinking buddy Rekha Seshadri and another by my former mentor Jonathan Eisen) were published in PLoS Biology. We also had an institute wide (TIGR is now part of the J. Craig Venter Institute, if you hadn't heard) happy hour to celebrate the event. I may be a fan of "free as in free speech, not as in free beer" software, but I'm not one to turn up my nose at literal free beer (which was provided). And the papers themselves are actually rather interesting. While there's currently a tension between TIGR (run by Craig's ex-wife Claire Fraser, and run rather like a university minus the teaching) and the rest of the Venter Institute (more centrally controlled by Craig), you have to admit that good science can be done in Craig's domain.
Posted by Jonathan Badger at 2:17 PM 2 comments: 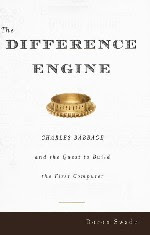 I've just finished reading Doron Swade's "The Difference Engine: Charles Babbage and the Quest to Build the First Computer". In it, Swade (a curator at London's Science Museum) tells two stories: the first is a biography of Charles Babbage, the 19th century polymath who designed a series of mechanical computing devices that were never built, and the other is Swade's own story of building a working version of Babbage's Difference Engine No. 2 for the Science Museum.


I've long been fascinated by the idea of clockwork computers, and had a general idea of Babbage's story, but Swade dispels some common myths that have surrounded him. For example, one often reads that 19th century manufacturing techniques were too crude to create parts with the required tolerances, but Swade's studies on the surviving parts of Babbage's unfinished engines shows that they were sufficient. Rather, the issue was political and personal. Babbage's constant redesigning of his engines rather than creating a working version of any of them, combined with his skill at making enemies in influential places, meant that the British government finally lost patience and discontinued funding. Swade also deflates the romantic idea of Lord Byron's daughter Ada Lovelace being the "first programmer"; While Ada did provide examples of engine programs (really just algorithms) in a series of notes to her translation of a French article about the Analytical Engine, they unfortunately seem to be paraphrases of Babbage's own work.

Oh -- one last note -- the title may lead to confusion with William Gibson & Bruce Sterling's alternative history novel also entitled "The Difference Engine" in which Babbage Engines were built and started the Information Age a century early. That's a different book!
Posted by Jonathan Badger at 5:36 AM 2 comments: