A research expedition aboard the famed R/V Atlantis (carrying the equally well known submersible DSV Alvin) has just set sail from Manzanillo, Mexico. Its 21-day mission is to explore hydrothermal vents in the Pacific and Sea of Cortes. That's what the "Extreme" part is -- they aren't going to bungee jump or anything.
I actually know (although not well) the two PIs who are leading the expedition -- I met Craig Cary in Australia at ISME last summer and I met Eric Wommack in Boston at ASM last spring. However, my principal interest in the expedition is that two of my JCVI co-workers, Lisa Zeigler and Doug Fadrosh, are aboard in order to collect viruses in the vent community. Viral ecology is a growing field -- viruses play a role in microbial ecology both as predators and as means of transferring genes from host to host.
The expedition has a lovely official site, and Lisa has started a blog that all of you should go visit -- blogging/journalling has a long and noble tradition in marine biology expeditions, going back at least as far as Darwin's "Voyage of the Beagle".

Is that a duck? It sure sounds like one! 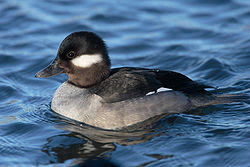 Only a few days ago, my former TIGR colleague Steve Salzberg wrote about Johns Hopkins University's plans to open an "Integrative Medical Center" where herbalism and other "alternative" (that is, unscientific) treatments will be offered. That was disturbing enough given the great stature Johns Hopkins has in medical science.
But today I received an e-mail that the East Coast branch of the JCVI, the institute where I work, as part of their "Lunch & Learn" series, is inviting a speaker from the "North Adams Wellness Corner" to talk about

"how pressure points can help relieve cold and flu symptoms. Learn easy and effective pressure points on the hands, face, and feet to relieve sinus congestion and boost your immune system".

I've only taken one immunology course and I didn't recall "pressure points" being mentioned, so I was a bit curious. Looking them up on the web, I find out that they are part of the mysticism behind martial arts! Quoting from that page, I find that

"The Eight Brocades, an ancient Chi cultivation technique that help heal the body, prevent illness and boost your immune system while activating special pressure points. These exercises have been practised for over 1,000 years by Chinese martial arts practitioners."

Not very promising. I'd be far more convinced by peer-reviewed articles rather than the anecdotal experience of Bruce Lee and his predecessors. Why is it that nonsense sounds more profound when it is from China or India? The West also had its pre-scientific medical theories. Why not return to the Four Humours of Hippocrates? This is even older than the "eight brocades", and according to the above logic, older is better, right? I guess the reason why I'm angry about this quackery is that I have too much yellow bile ("choleric").
Posted by Jonathan Badger at 9:21 AM 2 comments:

I'm attending the Metagenomics 2008 conference being held locally at UCSD. There's plenty of interesting talks (see Jonathan Eisen's coverage). However, today what struck me the most (egotist that I am) was how my work was brought up in three separate talks...
Alex Worden started out the day by discussing her work on picoeukaryotes (unicellular eukaryotes less than 2 microns in size) and there were a couple of slides dealing with the comparative work that Andy and I have done as part of her forthcoming Micromonas paper.
Then practically half of Shannon Williamson's talk about her metagenomics work on marine viruses was devoted to my phylogenetic pipeline, APIS (Automated Phylogenetic Inference System), which performs taxonomic binning of metagenomic data by the automated creation and interpretation of phylogenetic trees.
Then in the evening Jonathan Eisen brought up our 2005 paper as part of the justification for his new project to sequence hundreds of bacterial and archaeal genomes.
Thanks guys. Your checks are in the mail...
Posted by Jonathan Badger at 10:43 PM 1 comment: