Not really typical material for my blog, but here's a thriller even more convoluted than "Nobel Son" -- and only ten minutes long! It's a Belgian-made short film from 1996, given new life thanks to Youtube. Excellent reproduction/parody of 1940s film-noir.

The science in "Nobel Son"

Last night I saw Nobel Son, the new Alan Rickman movie where he plays an arrogant chemist who wins the Nobel prize. I don't want to talk about the actual plot, which is one of those "wheels within wheels" over-complicated thrillers that everyone has seen before at least once.
Instead, I want to discuss the Rickman character -- Professor Eli Michaelson. Granted, the plot didn't really require him to be anything else than successful and arrogant -- he could have equally been a CEO or something without changing the movie much, but let's see how well the movie captured science and its culture.
Posted by Jonathan Badger at 6:52 AM 2 comments:

10th Anniversary of my Defense -- A Retrospective

On December 2, 1998 I defended my dissertation entitled "Exploration of microbial genomic sequences via comparative analysis", the somewhat vague title referring to a collection of projects that I worked on in Gary Olsen's (pictured) laboratory at the University of Illinois at Urbana-Champaign, most notably the CRITICA genefinder (which was, until a year or so ago, still in use at JGI), and one of the earliest genomic studies of thermostability.
My thesis committee consisted of Carl Woese, Tony Crofts, and Stan Maloy (now at SDSU; I run into him at seminars occasionally). 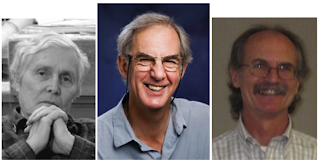 I don't have any pictures of the defense or the lunch afterwords after owning to a sad accident -- my parents' camera had a broken lens, and in that pre-digital era, they didn't know anything was wrong until they tried to develop the film. Still, the day sticks with me in memory. I gave what was probably the best presentation of my career (probably because I had practiced ten times or so), and the questioning was very friendly (the serious questioning had been several years before at my prelim).
I've worked a number of jobs moving to various cities in the name of science since those days -- a postdoc in Computer Science at the University of Waterloo,  a senior bioinformatics scientist at a now-defunct biotech firm in Montreal,  living in downtown DC while working in the microbial genomics departments of TIGR and its successor JCVI,  and now in San Diego, where I'm working at the west-coast campus of JCVI. Who knows where the next ten years will take me?
Posted by Jonathan Badger at 7:24 PM 3 comments: