Wiley and fair use of published figures by bloggers

This has been all over the blogosphere -- even on boingboing (which means that it's probably going to show up on Slashdot in a day or two), but it ties in with what I just posted, and it reminds us of yet another problem with non open access publishing.

Basically, the story is that a PhD student blogger, Shelley Batts, wrote a blog posting about a much discussed recent article that claimed that antioxidants in berries are increased by alcohol (the "daiquiris are good for you" paper). As part of her blog entry, Shelly posted graphs and a table from the paper, as would seem reasonable fair use in discussion of the science. But Wiley Publishing didn't see it that way -- here's their take:

"The above article contains copyrighted material in the form of a table and graphs taken from a recently published paper in the Journal of the Science of Food and Agriculture. If these figures are not removed immediately, lawyers from John Wiley & Sons will contact you with further action."

The only good thing I see about this is that the news has gotten out about what unreasonable asses Wiley are being and hopefully people will think twice before submitting a paper to a Wiley published journal.

BTW, the Wiley E. Coyote image I'm using is supposedly fair use (it's from Wikipedia), but I'll let you know if Warner decides to threaten me over that.

UPDATE: At 1:02 pm, the legal threat against Shelly was retracted:

"There has been a misunderstanding with this issue, inadvertently caused by a junior staff member at our Society. Our official response is below: 'We apologise for any misunderstanding. In this situation the publisher would typically grant permission on request in order to ensure that figures and extracts are properly credited. We do not think there is any need to pursue this matter further.'"

Still, it is disturbing that the concept of "fair use" doesn't seem to be acknowledged in that response -- under fair use, there would be no need for any permission to be asked for in the first place.

Posted by Jonathan Badger at 6:57 AM 5 comments:

Prototaxites a fungus? Who can tell without Open Access? 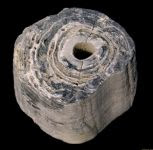 Prototaxites is believed to have been the largest land organism in the Devonian period, leaving behind tree-trunk sized fossils that have stumped geologists for the 150 years since their discovery. What exactly was it? Traditionally, it was assumed to be an ancient brown algae, largely from analogy with modern giant aquatic brown algae. However, according to a recent news article Francis Hueber and colleagues have just published a paper that gives convincing evidence that it was in fact a giant fungus. An interesting idea -- but unless your institution subscribes to the journal "Geology", you can't read the actual paper to decide for yourself. It's particularly sad that this is the case because the journal isn't published by a commercial company that would be expected to put profit before science, but by a non-profit society that supposedly stands for "Fostering the human quest for understanding Earth, planets, and life". Limiting access to papers seems to be in direct conflict with their stated mission.
Posted by Jonathan Badger at 11:20 AM 3 comments:

Well, besides TIGR, Kurt Vonnegut died yesterday as well. So it goes. While many of his later works were rather derivative, one is reminded of the quip about Bob Dylan: "sure, he's derivative nowadays, but the person he's plagiarizing from is his younger self." Certainly both Slaughterhouse Five and Cat's Cradle will stand the test of time, and I'm rather fond of Player Piano and Galapagos as well.
Posted by Jonathan Badger at 6:18 AM No comments:

Well, it's official -- TIGR is no more. We had an "all hands meeting" today and Craig informed us that the TIGR name has been officially retired (as has that of the lesser known TCAG, or The Center for the Advancement of Genomics, which had been the "traditional" J, Craig Venter Institute). We are all now employees of the J. Craig Venter Institute. Even our e-mail will be at jcvi.org and not tigr.org. Personally, I don't understand the rationale behind Craig's reasoning -- TIGR means something to the scientific community, and with the possible exception of the recent Global Ocean Survey, the J. Craig Venter Institute is an unknown quantity. But hey, what do I know? In other news, the much rumored "flat organization" that would bring faculty and staff scientists to equality turned out to be just that -- a rumor. I had mixed feelings about that one, anyway. As a staff scientist, I of course would like to move up in the social scale, but I realize that many faculty would be alienated by such a move. TIGR (er, the JCVI) is hemorrhaging enough faculty as it is.
Posted by Jonathan Badger at 2:12 PM 5 comments:

Last night I when was talking to my brother on the telephone, he mentioned that Stacey Singer, whom we went to high school with, had become a science journalist for the Palm Beach Post and had started a blog, Plasmid. It's a bit anemic at the present (I suppose Stacey's mostly writing actual newspaper articles), but hey, I know someone who grew up to be a science journalist. I guess when I make a major discovery I can call her up to tell her.
Posted by Jonathan Badger at 7:44 AM No comments:

You will be showered with good luch 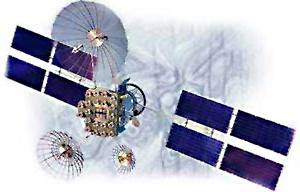 Today I received a disturbing fortune in a fortune cookie at the vaguely Pan-Asian restaurant across from TIGR. Normally, I'm annoyed by "fortunes" that are merely statements like "You have a good heart". Well, today, I received one with a concrete prediction, but a rather distressing one -- "You will be showered with good luch." What's "luch", you ask? Apparently it refers to a series of Soviet satellites. Also, it could refer to a brand of watches made in Minsk (the Communists loved to name their consumer goods after satellites; cf. the East German Trabant). The watch might hurt less.
Posted by Jonathan Badger at 2:10 PM 4 comments:

Back to the Future

Have you ever come across an old e-mail file? I recently was looking at some of my old files and discovered an archive of all of my grad school e-mails from 1992-1998. It's rather eerie to have the ability to look and see what you were doing ten years ago. (Okay, so the movie is about going back 30 years, but hey, cut me some slack). Anyway, bizarrely enough, on April 2nd and 3rd, 1997, I was arguing about gene annotation in Archaeoglobus fulgidus with people who worked at TIGR. Now I work at TIGR. (Well, technically, I now work at the J. Craig Venter Institute, TIGR subdivision -- it's like Hong Kong -- One nation two systems, or something like that).
Posted by Jonathan Badger at 7:13 PM No comments: