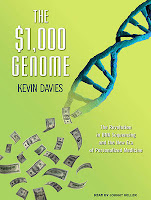 Pauline is a colleague and friend of mine who now leads a group at the Genome Institute of Singapore. We wrote a review chapter together on the human microbiome in a book that should be coming out soon. I suppose if you had to sum her up in a single adjective, "bubbly" works. But I guess I find the idea of someone I know being reduced to a journalistic cliché kind of amusing.
Posted by Jonathan Badger at 9:54 PM

wow, scientific books are expensive ~$170. Maybe specialized books like these are the ones that are going to benefit more from electronic editions.

Yeah, I won't be offended if you don't rush out and buy a copy of the book with our article. I'm not entirely convinced that these types of books (which are really collections of solicited review articles on a given subject rather than a coherent book) really are necessary -- but Pauline was the invited author and she asked me to help her with it (as her work is more human than microbial).