Not your typical Friday Cat Blogging 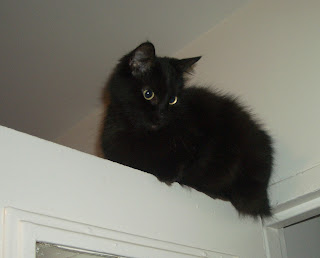 There's a tradition in blogging culture termed "Friday Cat Blogging". in which bloggers post light-hearted articles on Fridays, with the clichéd example being pictures of one's cats. Well, as you can see, I did post a picture of Bella Cat Badger, perched upon my closet door as she so often is, but I actually have a more serious reason for bringing up the topic of cats this Friday -- Driscoll and colleagues newly published paper "The Near Eastern Origin of Cat Domestication" (probably not open access, unfortunately). Anyway, as the article involves both cats and phylogenetic inference, how could I resist?

Small wild cats live (or have lived) in many places in Europe, Africa, and Asia. So an obvious question is whether domestic cats in different parts of the world are more closely related to their local wild cats (evidence of independent domestication events in different parts of the world) or to wild cats from one part of the world. Driscoll and colleagues addressed the issue by two different methods: making a neighbor-joining tree from short tandem repeat (STR) profiling (basically DNA fingerprinting) of 979 cats and by making a maximum parsimony tree from the sequence of the ND5 and ND6 genes from the mitochondria of 742 cats. The cats contained a mixture of wildcats, feral domestic cats, and domestic cats of various breeds sampled from Europe, Asia, and Africa. Both analyses supported the conclusion that the closest ancestors of both European and Asian domestic cats are wildcats from the Near East. However, the mitochondrial data suggests that there are at least five maternal lineages within that group.
Posted by Jonathan Badger at 1:08 PM 2 comments:

There were a lot of blog postings about the evolution articles in yesterday's NYT (for example, JE's, Coturnix's and Larry's), but I don't recall anyone mentioning Dennis Overbye's article. I realize that making fun of bad science journalism is getting to be a rather repetitive joke, but this one is just weird. The article is combining two different topics. The first is about a Japanese group that encoded "E=mc^2" in DNA and introduced it into E. coli. That's a cute but in the end rather useless trick, rather like using DNA to solve cases of the traveling salesman problem (which people have also done). Apparently, the Japanese group seriously thinks that DNA in living organisms could be a practical data storage method, and claims that the problem of mutation could be solved be using multiple copies (which would only slow down the decay, not halt it).

It gets more disturbing in the second half -- apparently actually taking seriously the idea that messages could be hidden already (by aliens?) in our DNA. I mean, everyone is amused by finding phage proteins that actually contain the word "PHAGE" using single letter amino acid abbreviations, but that's different from actually assigning meaning to the coincidence. The numerous falsified "solutions" to the Voynich manuscript, the supposed Bible Code (and the facetious Moby Dick code), and the endless reinterpretations of Nostradamus suggests that people can find secret messages even when none exist. What's the point of encouraging such nonsense by even seriously considering it in a major newspaper? I expect a crank volume on messages in our genome any day now -- in fact, were I less scrupulous, I'd write it myself under a pseudonym -- I'm sure it would sell.
Posted by Jonathan Badger at 6:55 AM 2 comments:

"FBI tries to fight zombie hordes". Okay, I know the author knows he's being clever, and probably the people who actually have to deal with compromised Windows machines are already sick of the slang term "zombie", but still, I never expected to read such a Romero-esque headline at the BBC except maybe on April Fool's day.

Not that the zombies in the article affect me other than sending me more spam -- I'm a Linux and OS X user...
Posted by Jonathan Badger at 7:21 AM 1 comment:

Genome of DNA Discoverer NOT Deciphered 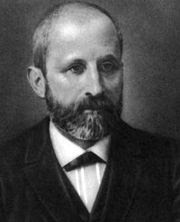 Do you recognize the man in the picture? It's Friedrich Miescher, the Swiss biologist/biochemist who discovered DNA in 1869. So, when the NYT announced today that "Genome of DNA Discoverer Is Deciphered", I was really excited, despite the annoying (and incorrect) use of "decipher" to mean "sequenced". Just think! Sequencing the genomes of Victorian scientists is now in our grasp! Who will be next? Darwin? Maxwell? Faraday?

But alas, it isn't so. It's just Jim Watson's genome.