The Genome Sequence of Phaeodactylum tricornutum 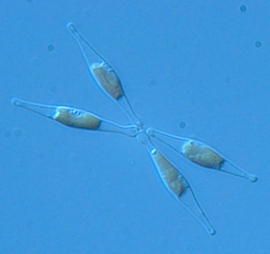 What's this? Another eukaryotic genome paper with me on it? I blame Jonathan Eisen for putting me on that road to ruin -- I never touched the nucleated rascals before Tetrahymena.
But seriously, single celled eukaryotes are cool, and not Eisen but rather Andy Allen (who doesn't have a web page or blog to link to, unfortunately) is the one to blame for getting me involved with his beloved diatoms.
P. tricornutum is the second diatom genome to be sequenced, and first of the pennate (elongated) lineage. We discovered that this genome was quite different from that of Thalassiosira pseudonana, the first diatom genome to be sequenced , which is a member of the centric (hatbox/cheesebox/petri dish) lineage.  We also identified about 600 genes that we believe to be of bacterial origin in this genome. As this was part of the analysis that I did, I'm perhaps biased in that I think this one of the most interesting results in the paper. This analysis wasn't just "BLASTology" (being just based on BLAST output), but rather based on phylogenetic trees for each predicted protein coding gene in the P. tricornutum genome.
There's been some press about the paper -- including this one in the German newspaper Die Welt -- whose sub heading "Diese Lebewesen entpuppen sich als eine kuriose Mischung aus Pflanze, Tier und Bakterium" implies that P. tricornutum is a curious mix of plant, animal, and bacterium -- not exactly true, but hints at the HGT analysis that we did. There's also this press release that mentions me and Andy by name, but so far no papers have used that part :-)
Anyway, the paper (which is under a Creative Commons License, showing that even commercial publishers like Nature can be reasonable) is up on Nature's advance publication page as of yesterday. Check it out. And the supplemental, where most of the actual data is.
Posted by Jonathan Badger at 5:47 PM 1 comment:

The Genome Sequence of Penicillium chrysogenum 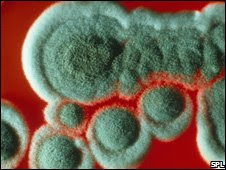 With all the work I've been doing in metagenomics, it's nice to be reminded that I still do some of the non-meta type -- yes, I was involved in the P. chrysogenum project, and the paper  (and supplemental) is now up in Nature Biotechnology's Advance Publications page prior to the print publication.
We've actually gotten a little bit of press -- the BBC has a brief article here.
P. chrysogenum is one of those obvious genomes people are surprised to learn haven't been sequenced yet (well until now). While a "pure" biologist may yawn and say "it's just another filamentous fungus -- haven't we sequenced those already?", there is real practical potential for metabolic engineering of new antibiotics from this genome given that researchers have been doing work on the bug for over 60 years. Besides, the genome wasn't completely uninteresting even from the viewpoint of basic science -- we snuck in a fairly controversial fungal phylogeny in figure 2 -- and I stand by it as we used far more data in our alignments than in previous studies.
[updated links to final published version 10/14/08]
Posted by Jonathan Badger at 7:13 AM 4 comments: