My immunologist friend Andreas Krueger has recently pointed out to me that according to a certain website the reading level of this blog is "Genius". I'm sure this is every bit as scientific as those quizzes that tell you which Star Wars character you are most like. Also, this ranking was made prior to this post -- it would be amusing if this post somehow weakened the rating...
Posted by Jonathan Badger at 9:02 AM 2 comments:

A Life Decoded: My Genome: My Life 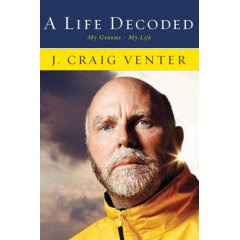 First of all, I'll get the required whining over the title done with -- yes, RPM, myself, and TR Gregory all have written about our annoyance with the terms "decoded/deciphered/cracked" in relationship to genomes, but there's a good chance that the title was thought up by the publisher. I would have called it "A Life in Sequence", but oddly enough, nobody asked me.

Now that that's done, how was the book? Pretty good (and I'm not just saying that because Craig's my ultimate boss and could fire me, honest -- he'd have to know who I was, for starters). It's a bit snarky in places, and some of his opponents come off as caricatures, but it's entertaining in much the same way as The Double Helix was.

The book is written as an autobiography, with bits of relevant genome information inserted in -- the gimmick is that this is the first of many "molecular (auto)biographies" that will interpret lives in the context of genomic sequences and the alleles the subject carries. Right now, it is a gimmick (although an amusing one), but I can see how in the future it might really be informative.

Much of Craig's working class youth and experience in the Vietnam War have been covered by various media stories before, but it is nice to hear it straight from Craig -- for one thing, it clears up the confusion between the shark and sea snake stories -- often these anecdotes are wrongly merged into one story.

What was new to me was learning about his pre-genomics scientific career. I had no idea that Craig's background was in biochemistry, for example. He credits that with helping him getting the early (notoriously temperamental and unreliable) automated sequencing machines to work when others, mostly from genetics and molecular biology backgrounds, couldn't.

One of my critics, John Sulston, objected that I wanted to have it both ways: "to achieve recognition and acclaim from his peers for his scientific work, but also to accommodate the needs of his business partners for secrecy and enjoy the resulting profits". I plead guilty, along with the rest of humanity, to committing the most heinous crime of both wanting my cake and eating it.

The rest of humanity indeed. Later Craig shows that many in the "holier-than-thou" public genome project also had links to the biotech industry; their primary difference from Craig seems to be that they tended to hide their conflicts of interest rather than openly declaring them.

Some of Craig's interpretations may be a little off base -- at one point Craig prides himself for not having the tenure system at his institutes on the basis that "the second rate people who thrive in a tenured environment like nothing more than to surround themselves with more mediocrity and drive out those who might excel and reveal the shortcomings of the entrenched". Well, perhaps. But the simpler explanation might be that tenure is rather hard to give when everyone is working off soft money which could disappear in the next funding cycle. And there has to be more to the story that Claire was the one who suggested merging JCVI and TIGR. In what context?

But in general, Craig's observations are dead on. Venter's opponents have tried to spread the myth that he's out to be "the Bill Gates of Biology", and whatever faults the guy has, his motivations are a lot more complicated than just the pursuit of money. Shreeve's "The Genome War" covered some of this, but it is nice to finally hear Craig's story from himself. 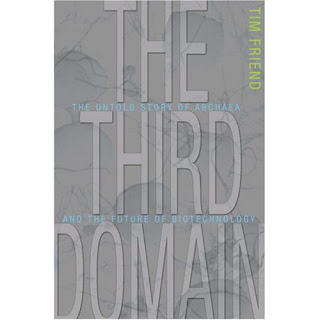 Tim Friend's recent book The Third Domain is an odd book on two levels -- first of all, the story that one would think it tells, that of Carl Woese's discovery of the Archaea, the initial hostile reaction that the discovery met with at the hands of the scientific establishment, and its eventual acceptance by the majority -- makes up only one chapter (chapter 3) of the book. The rest of the book mostly follows field microbiologists like Karl Stetter and Eric Mathur as they collect samples (often, but not always, of archaea) from hot springs and thermal vents. Secondly, rather than being one unified whole, each chapter reads as its own story (which it may well have been; Friend is a former USA Today science writer and may be simply fleshing out articles he's already written). I'm of two minds about this book; as a evolutionary microbial genomicist (and one who has had the honor of working with Woese), I'm glad that there's a new book for the general public that acknowledges that microbes are worth studying for things other than their effect on human health; but on the other hand, I can't help but wonder if the story of the Archaea couldn't have been told in a more engaging manner. Bill Bryson, in his A Short History of Nearly Everything managed to tell Woese's story (if a bit too simplified) in an exciting chapter there. In conclusion, The Third Domain is worth a read (especially if you are interested in the subject), but the definitive book on Woese and the archaea has yet to be written.
Posted by Jonathan Badger at 5:52 PM 1 comment: