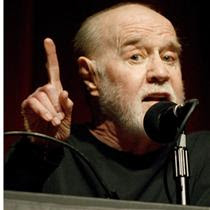 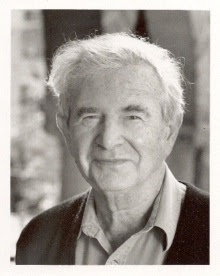 Within a span of about six months we have lost two greats with homophonic surnames -- Sam Karlin, the national academy belonging statistician whose pioneering work in computational biology lead to the statistics behind BLAST (as well as more obscure programs), and now the great comedian George Carlin. Many people may think that besides their name, these two people had nothing in common. Not true.

For example, Carlin as well as Karlin has contributed to statistics. Who can forget his great insight "Just think of how stupid the average person is, and then realize half of them are even stupider!"? And before you object that he should have used "median" in that sentence, be aware that the statistical use of "average" need not mean "mean" (in the arithmetic sense) -- the median can legitimately be called an average as well.

And Karlin was a master of the pithy one-liner himself: "The purpose of models is not to fit the data but to sharpen the questions". Well, maybe it didn't bring down the house when he said it, but it's something worth always keeping in mind.
Posted by Jonathan Badger at 11:56 AM No comments:

Ralph Lewin's interests intersect mine in two quite different ways. First of all, Lewin is a renowned marine microbiologist, and most of my current projects are marine as well. But secondly he is well known among fans (of which I am one) of the artificial language Esperanto, even being the co-author of a translation of "Winnie The Pooh" into the language. What I hadn't known until today was that Lewin had combined his interests in two papers from the early sixties: Difektita Aŭtotrofo de Mutaciita Chlamydomonas (Defective Autotrophy of Mutated Chlamydomonas) and La Enpreno de Strontio en Kokolitoforoj (The Takeup of Strontium in Cocolithophores). In both cases Lewin wrote papers which except for an English abstract, were entirely in Esperanto. And while it's true that Esperantists have organizations such as Akademio Internacia de la Sciencoj San-Marino that occasionally publish scientific reports in Esperanto, Lewin's papers were in a mainstream journal -- Plant & Cell Physiology. Makes me wonder what the neesperantistoj thought when they saw the papers...
Posted by Jonathan Badger at 9:15 PM 4 comments: 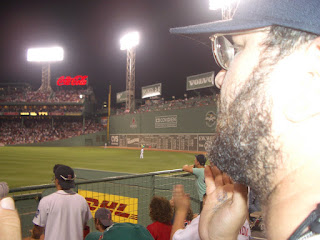 Well, I'm back in San Diego, and people have been asking me about ASM (in person, if not in the comments), so I suppose I ought to fulfill my promise and actually write something about the talks.

National Academy member Lucy Shapiro gave a very interesting retrospective keynote on the history of her work on Caulobacter. Having worked on Hyphomonas, a related organism, I found it obviously relevant, but what I found especially interesting was the modest style of the talk. Lucy openly admitted that most of the work was done by her many students and postdocs over the years, and rather than just include their names on an unreadable slide at the end, she mentioned them by name in her talk in the relevant place as she discussed experiments that led to various discoveries about the development and cell cycle of Caulobacter.

Howard Frumkin of the CDC talked about doing "green science", reminding us that biomedical research uses over twice the amount of energy per unit space that the commercial sector does, and that it is important for scientists to "green their sector first" to avoid looking like hypocrites. Although he gave many interesting suggestions to reduce the environmental impact of science, I don't recall him questioning the need for big conferences like the ASM where thousands of scientists fly in from thousands of miles away. Replacing those with video conferences (admittedly much less fun) would greatly reduce the carbon footprint of science.

My ultimate boss, J. Craig Venter, gave a talk about current work in the Global Ocean Survey. Memorably, he started his talk with "I'm J. Craig Venter from an institute of similar name..."

Jonathan Eisen spoke on phylogenomics (link is to Kimmen Sjölander's page on the subject) and origin of novelty, nicely illustrating this rather theoretical notion that he originated with practical examples in his own research. Speaking of Eisen, the picture above was taken at a Red Sox game that I attended with Eisen, Eric Wommack, Jacques Ravel, and some of Eisen's Boston-based relatives. The bearded guy in my picture is Eisen himself, and if you zoom in, you may notice that he has "RecA" written on his hand. Don't we all write the name of our favorite proteins on our hands?
Posted by Jonathan Badger at 10:10 PM 2 comments: 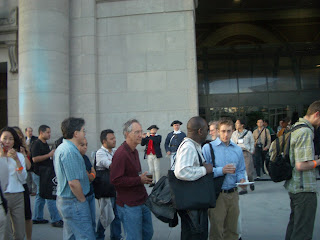 Well, it's time for the ASM (American Society for Microbiology) general meeting, and this year the venue is Boston. So 11,000 microbiologists have descended on Beantown this week - if you're a local and were wondering why those strange people on the "T" today were talking about Bacillus anthracis, don't worry - they (probably) weren't bioterrorists.

I'll give more detailed information on the talks in later posts, but I'd just like to add to Jonathan Eisen's critique of the structure of the meeting. First of all, it is extremely annoying that they are aren't dedicated poster sessions where the rest of the conference stops -- today, for instance, I had to chose between poster sessions and attending hour long talks by such luminaries as Ed DeLong and Mary Ann Moran, which nearly completely overlapped the poster sessions in time. What's worse, several students of Moran were presenting their posters while Mary was giving her talk, presumably depriving those students of their most interested "customers". 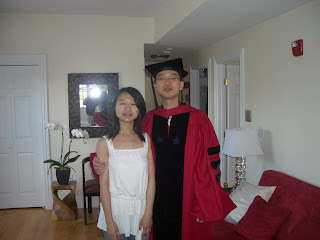 nother exciting event in Boston is that my good friend John Tsang (no, no, not this John Tsang), who was a masters student in the group where I did my postdoc, and with whom I later worked in industry, has just earned his doctorate in biophysics from Harvard. I have to admit feeling a bit of pride in this because I encouraged John to go back to grad school and wrote one of his letters of recommendation. John is going to go through the formal convocation on Thursday, and pictured is John all dressed up (next to his wife Amelia).
Posted by Jonathan Badger at 7:46 PM 1 comment: