I'm back from Australia (although jet-lagged), and looking through the NYT science articles that I'd missed over the past week and a half, I discovered this article about the techniques used to establish that the mailed anthrax powder that killed photo editor Robert Stevens in 2001 was from the RMR-1029 strain (indirectly suggesting Bruce Ivins as the culprit, although the article stresses that is still as yet unproven, despite Ivins' suicide).
It's a very interesting article, but I have to admit that what drew me in initially was the photo of my former TIGR colleague Jacques Ravel - while articles featuring Craig Venter are too common to mention these days, it's nice to see some coverage of other people I've worked with.
Posted by Jonathan Badger at 8:11 AM No comments: 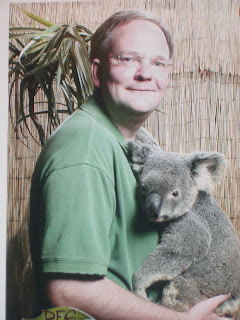 On Wednesday we had a free day -- a very clever thing that I wish other conferences would imitate -- having a free day in the middle allows a bit of a mental breather to prevent burn out from all the scientific sessions. We used the time to go to Kuranda and environs. Kuranda is located in a rainforest and is reached through an aerial cable tram similar to that found in Palm Springs, California (but even more impressive given the length of the trip and the beauty of the scenery). The village itself is a bit of a tourist trap, as expected.

There's a nice, although small, museum called the "Rainforest Interpretation Centre" that helps visitors learn about the forest through exhibits and interactive displays. One of the oddest things was the three languages used -- English (of course), Japanese (understandably -- much like Hawaii, North Queensland seems to be a Mecca for Japanese tourists), and finally, German of all things! Of course I couldn't resist playing with interactive displays where "Welcher Baum ist das?" was asked. I understand that Europeans visit Australia, but why German in particular and not say, French and Spanish as well?

Thursday was back to science. Craig Cary talked about metagenomics in the Antarctic Dry Valleys -- I hadn't realized that there are ice-free deserts in Antarctica, but apparently there are, and there's cyanobacteria (in particular) living in them. About midway through the talk, Craig shifted gears and started talking about (I'm not making this up) mummified seals! Apparently, Antarctic explorers have long known about these naturally mummified seal corpses (some over a thousand years old) , but Craig was interested in investigating whether the microflora underneath the seals was different than in the surrounding soil. Not surprisingly it was -- the Antarctic deserts are very carbon and nitrogen starved and a slowly rotting thousand year old seal is a much better source of nutrients than anything else around. Craig even transplanted a seal from one place to another to see if he could influence the new environment in the same way, and the experiment worked.

Rick Cavicchioli talked about the genome of Methanococcoides burtonii. I liked that. These days traditional genome projects are somewhat unfashionable (and unfundable), but not everything has to be metagenomics (although Rick is doing that too). Amino acid comparisons with relatives living at higher temperatures were a major part of the story of this genome -- and that work was pioneered by my fellow blogger (and commenter) Neil Saunders, as Rick acknowledged.

I will try to write up a final writeup on the last talks soon. And yes, that is a real live koala with me in the picture.
Posted by Jonathan Badger at 11:34 PM 2 comments: 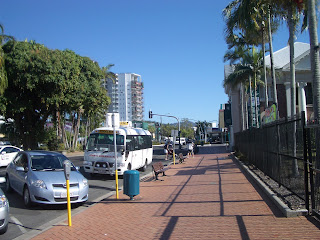 On Tuesday, Phil Hugenholtz talked about his work in metagenomics of a hypersaline mat in Guerro Negro, Mexico. What makes this project a little different from typical "bulk" metagenomics projects such as the Global Ocean Survey is that the peat-like mat has distinct layers of microorganisms even within a centimeter thick sample and these layers can be separated and analyzed individually. Phil and colleagues analyzed 10 layers of the mat and found distinct differences. Particularly interesting was the overabundance of chemotaxis genes on the oxygenic/anoxygenic boundary, which he explained by the fact that microbes that live near the border have to be able to move into their preferred layer as this boundary shifts over the duration of a day. Phil also looked at amino acid bias between layers, which brought back fond memories of my work in grad school linking amino acid differences to thermostability.

Gene Tyson talked about metatranscriptomics, or metagenomics on transcripts (well, cDNAs anyway). As I have a grant funded (with Andy Allen) to do metatranscriptomics on eukaryotic phytoplankton, I found it interesting (although depressing) that despite all the optimizations to avoid it, still 50% of their cDNAs are rRNA.

I had lunch with Rick Cavicchioli and members of his group as JCVI's field biologist Jeff Hoffman hopes to get me involved in the analysis of the Antarctic lake metagenomics data he is generating in collabioration with Rick's lab.

In the afternoon, I presented my poster on "Large Scale Analysis of Nitrogen Utilization Genes in the Indian Ocean" -- basically a bioinformatic analysis of the GOS II data in the context of several genes involved in organic vs inorganic nitrogen uptake and usage. While I wasn't swamped with visitors, a dozen or so people stopped by and gave useful suggestions.

In the evening we had more keynotes from Roberto Kolter and Norm Pace. Kolter's talk (on the genetics of biofilm production in Bacillus) was really wonderful -- and not just for the knowledge imparted -- Roberto is a truly gifted public speaker, a rarity among scientists.

Norm's talk was the same "don't use the term 'prokaryote'" talk that I've heard twice already. Now don't get me wrong -- I have enormous respect for Norm and even quite a bit of agreement for the meaningless nature of the term "prokaryote", but really, I think nearly everybody in the field has either read his paper on the topic or heard him speak on it at least once. This might be forgiven if Norm was some retired scientist who was no longer is generating any new ideas, but happily Norm and his lab are still quite active -- I think everybody would find talks on new work from his lab much more interesting than yet another version of the same "prokaryote" talk.
Posted by Jonathan Badger at 3:08 PM 2 comments:

The first two days of ISME went quite well. First of all, I have to give the organizers high marks for actually providing a conference bag worth having (BTW, it would be interesting to figure out someday where and when the custom of "conference bags" started -- why does every conference assume that attendees need a conference-specific bag?) Rather than the nearly useless tote bags which one often gets, the ISME 12 bag is a nice high quality backpack that will be worth keeping after the conference. Conference bags may be a minor issue, but a quality bag is a nice touch.

Bo Barker Joergenson gave a nice keynote on Sunday night on the subject of the "deep biosphere" by which he means microbes living deep in the sediment at the bottom of the ocean. Ships have returned drilled cores even from a couple of kilometers down that contain microbial cells. For many years there was debate over whether these cells were actually alive or just the "corpses" of cells that drifted down and never decayed, but now there is general agreement that there are living cells. What there isn't agreement at this point is what type of cells there are. Some groups, using Q-PCR have concluded that the primary players are bacteria; others using FISH-IPL say archaea are. As a bioinformatician, I find this conflict of experimental methods disturbing. Still, the "deep biosphere" is a fascinating topic to me.

After the keynote we had appropriately Australian entertainment; a group of local indigenous Murri demonstrated some traditional songs and dances and the use of firesticks.

On Monday the main series of talks began. Curtis Suttle talked about inferring the host species of marine viruses through phylogeny. He began with some fascinating statistics; there are 10^30 viruses in the ocean, and if they were laid end to end, they would stretch for 10^7 light years! And they contain more carbon than 75 million blue whales. So what exactly are these viruses infecting? Suttle has developed an interesting method where he first calculates phylogenies of viruses with known hosts, calculates the average genetic distance between viruses that infect the same host, and uses this distance to cluster sequences of viruses that infect unknown hosts. He then looks for correlation between occurrences of members of these clusters with morphologically different hosts in micrographs to assign presumed hosts. Obviously, morphology is a crude measure of species in any set of organisms (and particularly so for microbes), but it is a useful start.

Forest Rohwer, probably the best known researcher of marine viruses, gave a talk about many different projects his lab is pursuing. What I found most interesting was his idea of measuring the energy usage of phages by measuring temperature in calorimeters containing bacterial cultures with and without phages.

C.D. Long presented a good example of what I find most interesting in science -- the application of a technique developed for one problem to a different one. In this case, she utilized the traditional "checkboard" method (developed by ecologists studying island biogeography) to analyze the co-occurrence of different microbial species living on human teeth. I'll have to read up on the method to see if maybe I could do something similar.

And Mitch Sogin presented on his idea of the "rare biosphere" -- the idea that most microbial species are very low abundance organisms. I've heard Mitch talk about this idea before, but this talk was more technical and included more details --- not only of his experimental methods but also of his VAMPS analysis system. I've spent a lot of time basically writing my own version of many of the methods there because I didn't know the system existed.

P.S. Qantas found Lisa's bags.
Posted by Jonathan Badger at 12:21 AM No comments:

I realize that I've been a non-blogger as of late, but on the off chance some of you still have me in your feeds, I'll try to write something about the ISME (International Society for Microbial Ecology) meeting that starts this evening in Cairns (Northeast Australia, near the Great Barrier Reef).

Getting here was a bit of an adventure; coming into Sydney we were instructed that we must go through customs and retrieve our luggage before continuing on to any domestic flights. So I dutifully did that and waited for my luggage to show up at the carousel. It didn't. It turns out that because my Sydney-Cairns flight actually was the first jump in a Sydney-Tokyo flight, it didn't count as a "domestic flight" and I was actually supposed to go through customs in Cairns and collect my baggage there. After all this was figured out I very nearly missed my flight to Cairns -- as I raced through the Sydney airport to the departure gate I was one of those annoying passengers that you hear getting paged for the last call for their flight. But I made it -- and so did my luggage-- which is more than could be said for my friend Lisa's -- she still doesn't know the status of her baggage and whether it is lost for good.

But here we are in Cairns. As Lisa notes, the city is much like the San Diego that we left from in look and weather. Well, maybe how San Diego would look if Canadians had built it or something -- it does have the distinct Commonwealth feel somehow that I recognize from my time living in Canada.

More posts (with pictures and actual science) will follow.
Posted by Jonathan Badger at 12:27 PM 3 comments: